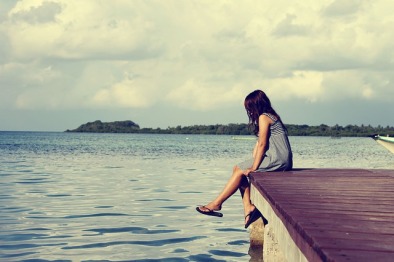 When I asked my friend if I could pray with her, the response made me sad:

“It’s okay, you don’t have to pray for me.  There are people with cancer and lots of other things worse than me.  You should pray for them.  I’ll be fine.”

It was as if she felt her problems and her concerns were unimportant to God, that she didn’t matter as much as other people, that she could only go to him with the really big issues and that she had to deal with everything else by herself.

It was as if she thought that, by asking God for help, she was taking his time and attention away from people who needed it more.

I assured her that God was big enough to deal with all of it, that I would pray for those other people but that I wanted to pray for her too, that God’s power was more than enough for everyone, and eventually she let me do it.

But don’t we all have those times when we wonder if our struggles really matter?

We look at the world around us and see massive issues like poverty, terrorism, human trafficking and natural disasters.  We look at people we know, in our family or community, and see serious illness, mental health problems, divorce and bereavement.  If we’re not struggling with any of those “big issues” it can be easy to fall into the trap of thinking that our problems don’t matter, or that maybe we don’t matter.  Maybe it seems wrong to bother God with our little concerns when there are people dealing with so much more.

My favourite story in the Bible is probably the story of the lady who suffered with bleeding for twelve years but was healed by touching Jesus’ robe.  I relate to it on so many levels- the years of feeling “different” and unclean, the growing faith that Jesus was the answer, the time hiding at the back of the crowd, battling the feelings of unworthiness and trying to work out the best way to approach him, and finally, the moment where a encounter with Jesus brought transformation.

The part of the story that has been speaking to me this week though is the part after the woman receives her healing, because there’s something I hadn’t considered about this passage before:  while all of this is happening, Jesus is meant to be on his way to a girl who is dying.

It is as he is making his way to Jairus’ house to help his daughter that the woman weaves her way through the crowd to touch his robe. Once she has received her healing, surely it would have made sense for Jesus just to let her go so that he could continue on his way.

But instead, he stops and asks: “Who touched me?”

I’m sure the disciples wonder what Jesus is doing.  Why does this matter when a girl’s life is at stake?  They point out that there is a huge crowd pressing in all around him.  Somebody probably accidentally bumped into him.

But Jesus knows it was deliberate; power has gone out from him.  And so he waits- until eventually the woman steps forward and comes out of hiding.

Trembling with fear, she falls at his feet, but he publicly affirms her faith and addresses her as “daughter.”

It’s an amazing display of love and compassion.  Not only has she been healed physically, but she is restored emotionally, and freed from the shame she has carried for twelve long years.

I love that Jesus takes the time to do this at a moment where it would have been understandable for him to ignore the woman to get to someone with a greater need.  Of course we know the end of the story: he will get there and he will heal the girl, but he has time for the woman too.  His power is more than enough for everyone.

I love that someone who was overlooked and disregarded by others, seen as an outcast and considered unclean, is left in no doubt about the fact that she matters to Jesus.

And I love that we serve a God who cares about the little things in our lives as well as the big ones, that we never have to hesitate to come to him, thinking that our concerns are too small or insignificant to bother him with.  He cares about the details of our lives, and each one of us matters to him.  He showed that by making time for the woman, and he showed that by answering the prayer for my friend in a way she would never have expected, letting her know that she mattered to him too.

“What is the price of two sparrows- one copper coin?  But not a single sparrow can fall to the ground without your Father knowing it.  And the very hairs on your head are all numbered.  So don’t be afraid; you are more valuable to God than a whole flock of sparrows.”  (Matthew 10:29-31)