This post is written to link with Five Minute Friday.  Write for five minutes on a one word prompt.  The prompt today is “expect.”  Also linking with Glimpses. 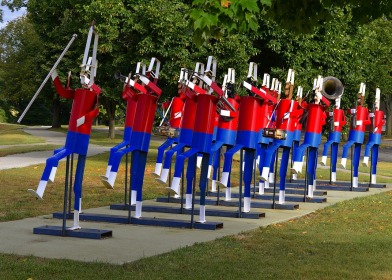 Have you ever got into something only to find it’s not what you expected?

10 years ago I moved to a new city and, as I loved music and wanted to find a place to play with others and to meet people, I signed up to join a “wind orchestra.”

Four months in, I was loving it.  The music was varied and challenging, the people were welcoming and a lot of fun and I was glad I’d found this group… but then it took an unexpected turn.

“We’ll have to get you a uniform,” they said.

I was confused; that was not what I’d signed up for.

When the talk of marching practice began, I knew I’d got into something very different from what I had expected.  I didn’t want to wear a uniform and I’d never played in a marching band, nor had any desire to do so.  I thought about quitting, but since I got on well with the people, I thought I might as well give it a try.  I didn’t expect it to be fun!

Over the years I’ve had all kinds of adventures: playing in local gala days while marching through torrential rain, performing in a tattoo with professional bands from 7 other European countries, taking part in the finale of an agricultural show (in other words: marching across the field in the main arena after horses and cattle have been parading round it all day, trying to avoid stepping in anything unpleasant, while still keeping time with the music! 🙂 )

Ten years on, it’s marching band season once again.  As usual with these events, I expect the unexpected, but I expect there will be some laughs and some good music and probably some rain!

And it’s an annual reminder to me to keep an open mind, because sometimes the unexpected can be better than you’d ever have imagined!

27 thoughts on “Not What I Expected!”