I considered whether to write today, unsure if I would have anything worthwhile to say.

It’s not for a lack of thoughts.  If anything I have too many flying through my mind at all moments of the day, but I’ve been thinking about some complicated things lately, and they refuse to be pinned down into anything coherent or helpful.

Lots of thoughts, but lost for words…

As I was pondering this, a story came to mind- one that inspired me as I began blogging, one that continues to inspire me now as I remember it, so I write in the hope that maybe it will inspire you too.*

A group of students gathered for a pottery class and, after splitting them into two groups, the tutor explained how it was going to work- how the course would be structured and how they were going to be assessed.

There was a key difference in the explanation that was given to each of the groups though.

One group was told that their grade would be based on the quality of pot they could produce by the end of the course.  To get an A they would have to produce a pot of the finest quality.

The other group was told that their grade would be based simply on the quantity of pots they could produce.  The more pots they produced, the higher their grade, no matter how good they were!

The first group spent their time carefully forming their pots, striving for perfection, working slowly, doing everything they possibly could to make their pots the best they could be.

The second group worked at speed to produce pot after pot, racing to make as many as they possibly could.

It may be a surprise to hear that, at the end of the course, the best pots that had been produced came not from the quality group but from the quantity group!

It seems that as they gained experience in producing pots they learned from their mistakes, they developed their technique and, free from the pressure of perfection which the other group had to contend with, they were able to produce their best work!

When I felt God leading me to begin writing, this story inspired me to blog.  I realised I could spend years painstakingly working on a manuscript before I ever let it see the light of day, or I could write and I could keep writing, and I could put it out there to however small an audience, and I could see what would happen.

Many of my blog posts have been far from perfect.  There are several posts from my early days of blogging where I look back and cringe (and delete some of them!) because the writing is so bad, or I’ve shared something I should probably have kept to myself.

As I look back though I’m also encouraged because I see real progress.  I’ve churned out 356 posts now over the last two and a half years, and I’m learning.  There are some posts I even quite like!

I’m not saying that we shouldn’t take time to edit our work to improve the quality.  I definitely see the benefits of that, and there are certain pieces I have worked very hard on and devoted considerable time to.  There is something extremely satisfying about feeling that a piece has been refined to the best of your ability.

But I doubt that I would have made as much progress if I had worked for two and a half years on one piece of writing, polishing it and seeking to make it perfect.

This encourages me to keep writing, even when I wonder if I have anything to say.

It’s one of the reasons why I love Five Minute Friday!  If you haven’t discovered it yet, I encourage you to check it out and consider joining in.  Each Friday a one-word prompt is posted and the idea is to write for five minutes on that prompt without editing or overthinking.  I confess I sometimes edit a little, and I sometimes take more than five minutes, but it has been a very helpful discipline.

Many weeks I see the prompt and think I have nothing to say.  I often mull it over for a few hours as I go about my day.  Sometimes an idea comes to me and I know what I want to write.  Other times I sit down to write with no idea what, if anything, will come out!

Usually I’m pleasantly surprised.  There has been the occasional post that hasn’t worked at all, but there have also been a few of those Five Minute Friday posts where I was stuck for words that have turned out in the end to be some of my favourite posts!

So let me encourage you today- keep writing, even when you feel you have nothing to say!  It might turn out better than you think! 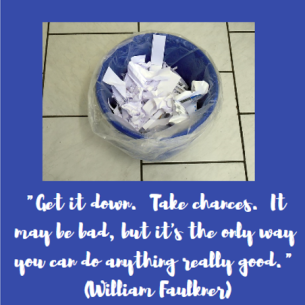 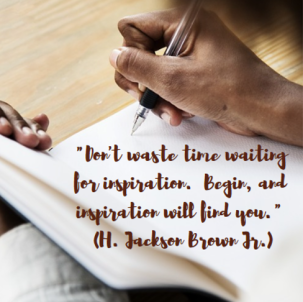 *I heard this story told so I have no idea of the source or if it is actually true.

45 thoughts on “When You’re Lost For Words…”