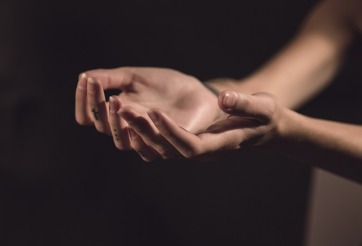 Towards the end of 2015, I heard people talking about selecting a word for the year to come- the idea being that instead of compiling a list of New Year’s resolutions, they would focus on one word throughout the year.

I was unsure about how effective it would be, but I had heard several people say it had worked for them, so I began to pray about whether I should do it and what my word should be.

One word kept coming back to me and it was not a word that I wanted.  The word was surrender.

It has been an interesting journey but I have grown to love the word and as I look back over the year, I can see that it has been incredibly powerful.

I wrote here about some of the blessings that have come from the journey of surrender so I won’t repeat all of that, but it has made a big difference in several areas of life.

It was interesting to go back and look at the definitions of surrender I found at the start of the year:

I think in many ways that has summed up the year.  There has been struggling, fighting, hiding and resisting, but there have also been moments of agreement to stop that, to give up, to yield to God.  And those moments when I have surrendered my will to God’s, stepped into a plan that was different from my own, laid down things I have been carrying, trusted and obeyed even when I was scared, are the moments that have led to the greatest blessing and freedom.

I think back to this time last year and remember how terrified I was about embarking on this journey, but I am so glad I did.

It will be an on-going journey.  There are still times when I struggle to surrender, but I have made progress this year.  I’m reminded of a quote by Elisabeth Elliot which I discovered at the start of the year: “One does not surrender a life in an instant. That which is lifelong can only be surrendered in a lifetime.”

So, although I will have a new word to focus on in 2017, the journey of surrender will continue, and my prayer as we head into the New Year comes from this song by Laura Story: 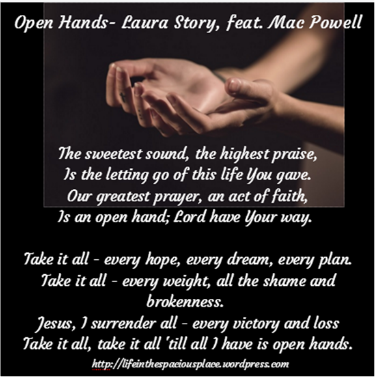 The video above is the official lyric video but it is not available in the UK- I’m not sure about other countries.  If you can’t play the video above, you can find an alternative version here.

You can find an index page of all my posts on the topic of surrender by clicking here.

10 thoughts on “Open Hands: A Year Of Surrender”