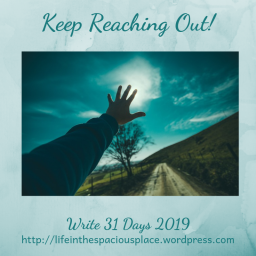 What’s your favourite Bible story? I’m afraid I can’t remember what it was when I was your age… I guess it was probably Joseph. I know that one has been special to you since you were a child – the idea that God has a plan for good in the ups and downs of life has always been a comfort to you, and I encourage you to hold onto that.

I’d like to tell you though about a story that has become precious to me in recent years, and I think a big part of it is because there’s a character that reminds me of you.

This lady was good at hiding, blending into the crowd so well that no-one would even notice she was there. She struggled with a lack of confidence, an uncertainty about her identity, a deep sense of worthlessness that held her back. In her case it was because of illness – an ongoing bleeding that nothing could cure, leaving her feeling unclean and hopeless.

But she also had two things going for her – faith and determination. She had faith to go to Jesus, trusting in his power, and she had determination not to give up when her fears and doubts threatened to get the better of her.

Somehow she knew that, even though she was overlooked and disregarded by others, Jesus could help her. She didn’t have the courage to approach him directly, but that didn’t matter. All she had to do was reach out and touch his robe…

The healing was instant! The bleeding stopped and she was well, but Jesus hadn’t finished. Unwilling to let her escape through the crowd, he called her out – not to rebuke her, but to honour her for her faith, to assure her of her true identity – daughter, dearly loved child of God.

She left to go home not only free of her physical suffering, but healed emotionally too – free from her shame, and secure in who she was.

I know that right now you feel a lot like the woman hiding in the crowd, struggling with that lack of confidence and feelings of worthlessness, but I also know that you have faith and determination.

So let me encourage you today, draw close to Jesus and keep reaching out…

He longs to see you made whole as well. It won’t be instant like it was for the woman in the story, but there will be some moments of power along the way, and if you don’t give up, eventually you’ll reach the point where you truly believe in your identity as a child of God and begin to live that out. 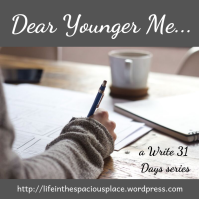 This post is part of “Dear Younger Me…” – a series for Write 31 Days in October 2019. Each day I am basing my writing on the one-word prompt provided.  Today the prompt is “reach.”  You can find an introduction to the series and an index of all the posts here, and you can find out more about the challenge and check out other people’s series here.

14 thoughts on “Keep Reaching Out!”