This post is written to link with Five Minute Friday: write for five minutes on a one-word prompt.  The prompt today is “darkness.” 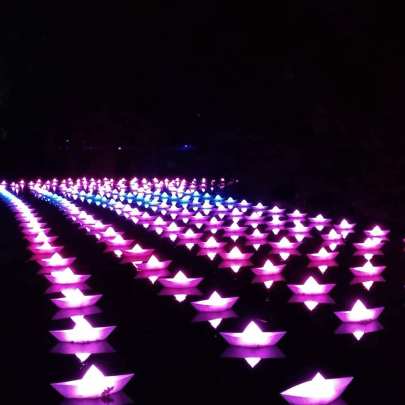 As the lights were turned out and the house was plunged into darkness, I was surprised at the fear that suddenly rose within me.  I had been scared of the dark as a child, as many are, but I thought I’d got over that fear as an adult.

It didn’t take me long to realise the problem – I was just too much of a city girl.  What I thought of as dark wasn’t really dark.  Now, out in the middle of the countryside, far from roads and streetlights, I discovered what darkness really was.

It was my first day of training with the youth work organisation I was going to be working with.  After the training programme was finished for the evening, someone came up with the idea of playing Sardines in the dark.  If you haven’t played Sardines before, it’s like Hide and Seek but one person hides while everyone else looks for them and then joins them in their hiding place when they find them.

As I traipsed through the house, my panic began to grow.  It suddenly hit me that I was miles from home, surrounded by people I’d only met that day, in an unfamiliar house with creaky stairs and wobbly floorboards and lots of narrow passageways I hadn’t discovered yet even in daylight.  And I was in the middle of nowhere in the darkest darkness I’d ever experienced!

At first my technique was to find someone to follow.  I no longer cared about finding the person who was hiding.  I just wanted to make sure I was not alone.  I stuck it out for about fifteen minutes but it felt like an eternity.

Then, as I was climbing some stairs, I put my hand against the wall, and I felt it beneath my fingers – a light switch!

The temptation was too much.  I thought I’d just switch it on for a second or two.  I’d have to switch it back off, but I could pretend it was an accident, and at least I’d get to see where I was and who I was with.

…only an incredibly loud ringing sound!

In my panic, it took me a moment to realise that I was responsible.  It wasn’t a light switch I had pressed, but the fire alarm!

Fortunately I was able to switch it back off, and I don’t think anyone ever found out it was me!

I resigned myself to enduring the darkness, but I have never known such relief as when the game was finally declared over and I could return to the safety of the brightly-lit lounge.

It seems that this is life for many people – stumbling through the darkness, searching for light and peace, putting their hope in people or in things that seem to promise light but which only lead to deeper darkness in the end.  So many feel lost, scared, and helpless, trapped in darkness, unable to see a way out.

And yet there is hope:

“The people who walk in darkness will see a great light.  For those who live in a land of deep darkness, a light will shine.”  (Isaiah 9:2 NLT)

“The one who is the true light, who gives light to everyone, was coming into the world.”  (John 1:9 NLT)

“The light shines in the darkness, and the darkness can never extinguish it.”  (John 1:5 NLT)

There is only one way out of the darkness, but that way is open to everyone because the light of the world has come.

Jesus said, “I am the light of the world.  If you follow me, you won’t have to walk in darkness, because you will have the light that leads to life.”  (John 8:12 NLT)

17 thoughts on “Searching For Light”